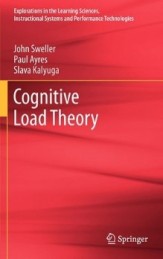 This is the third post looking at the application of Cognitive Load Theory to teaching English. The first two can be found here and here.

In Cognitive Load Theory, Sweller et al posit that ‘One early concern about the use of worked examples was that they led to passive rather than more active learning. Would learners attend to and study the worked examples in enough depth or would they simply gloss over them’. One of the solutions to this concern was the development of The Alternation Strategy, an approach that I wrote about in the previous post. Another solution to the concern that students would not pay sufficient attention to the worked example, and therefore not build the required schemas within long term memory that they could use when attempting subsequent problems, was the development of Completion Problems, tasks that include ‘a partial worked example where the learner has to complete some key solution steps’.

So why do they work?

What does the research say?

The table above displays the results from a 1992 study where students were taught statistical concepts like mean, median and mode. Students were placed in one of three instructional set ups: all problems, worked example and practice pairs (The Alternation strategy) and completion problems and practice pairs. Further studies (Paas & van Merrien boer 1994; Trafton & Reiser 1993) also found that worked examples and completion examples were ‘more efficient and equally effective in terms of learning outcomes than lessons that required learners to work all problems’.

So, if both worked examples and completion problems are ‘equally effective’ then how are we to know which one to use? This is an important question and there is a possible solution in an approach known as ‘backwards fading’.

One of the six principles of task design in Engelmann’s Direct Instruction is the shift from an emphasis on the teacher’s role as a source of information to an emphasis on the learner’s role as a source of information. This shift broadly matches the notion of the ‘I-we-you’ model common in explicit and direct instruction. The three stages also seem to broadly link to some of Rosenshine’s principles of instruction. This broad convergence should make us stop and think: if three frameworks all broadly identify a similar approach as being effective, then perhaps this is a continuum that should be systematically threaded into our instructional sequences and schemes of learning. 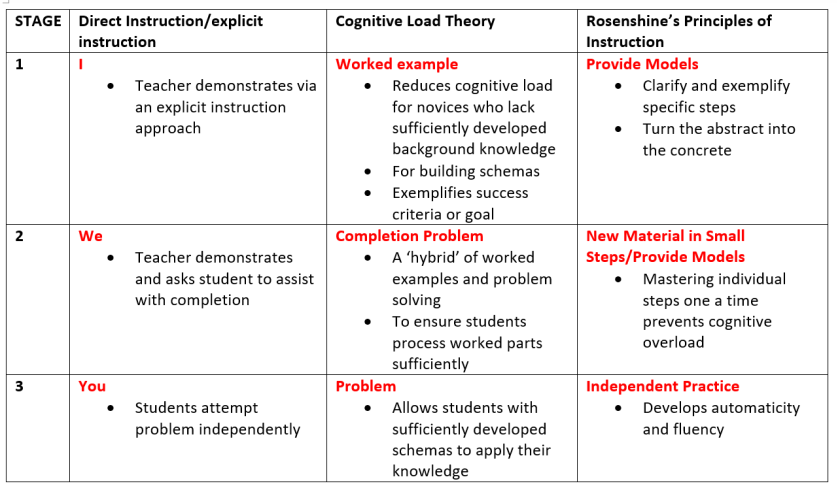 Cognitive Load Theory also describes this gradual fading of support and presents an almost directly analogous continuum that students move along as they gain in proficiency. In Efficiency in Learning, the authors suggest that ‘fading techniques allow you to accommodate a gradual learning process’, a statement that seems to echo the DI approach of small, manageable and incremental steps along a learning pathway. As learners begin, they ‘should devote as much working memory as possible to building schema’, and the most efficient way of doing this is probably by studying worked examples that precisely exemplify not only the concept that is being taught, but also what success looks like. While abstract and ambiguous success criteria may be useful for teachers, concrete examples are probably far more useful for students.

A lesson, or series of lessons, that involve ‘backwards fading’ will begin with worked examples, providing concrete models of what is being taught. The next worked example could be a ‘completion problem’ where students are expected to finish a particular task that has been started for them; eventually, learners will be asked to attempt entire problems for themselves.

Here is a conceptual model of this process from Efficiency in Learning: 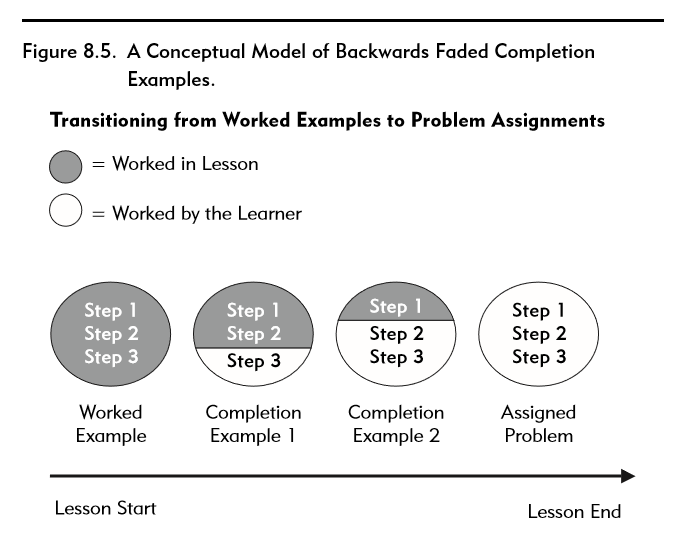 While this conceptual mode describes a lesson, if we follow Engelmann’s guidance, new concepts should be initially taught across at least two lessons and then continued in a track system across many more, resulting in distributed practice and becoming interleaved and integrated with other things that have been taught, eventually resulting in flexible, wide application.

Here is an example instructional sequence from teaching ‘Even though’ sentences to a very low ability year 7 class. The sequence was during one lesson and it combines ‘backwards fading’ with Engelmann’s ideas about examples and non-examples:

Following Engelmann’s guidance, I presented minimally different examples that share the greatest number of irrelevant features to make clear the meaning of ‘Even though’, ensuring that, logically, only one interpretation is possible. I labelled them as ‘surprising’ or ‘not surprising’ in an attempt to describe the function of ‘Even though’. To avoid ‘stipulation’, the idea that students will erroneously infer that ‘Even though’ sentences are always about weather or involve umbrellas, I followed these written examples with a series of wider ranging oral examples, asking students ‘OK’ or ‘Not OK’. I did this using choral responses where students responded to a signal-in this case, me dropping my arm-in order to maximize student response rate and allow me to get feedback from the whole class as to their understanding. If only one student answered, this would not tell me if the others had understood. The signal is to ensure that everyone responds at the same time so as to minimize the opportunity that students will merely copy their peers. Although the sequence below certainly breaks some of the rigorous theoretical principles that examples and non-examples are supposed to adhere to, it resulted in a very high success rate.

Even though I was the fastest, I lost the race.    OK

Even though I was the fastest, I won the race. Not OK

Even though I loved football, I played tennis.     OK

Even though I wanted to see my friends, I met them.   Not OK

Even though he had no money, he went shopping.      OK

Even though I was the best at physics, I passed the test Not OK

After the choral responses, students attempted these styles of sentence where I had begun the construction and asked them to complete them.

Here, the worked part of the construction had been stripped back even further, allowing students to attempt even more of the problem themselves. Following the conceptual model from Efficiency in Learning, the final task saw students creating their own sentences with no completed steps or support.

I am currently teaching the same class how to use embedded evidence in sentences, a crucial foundational skill for analytical writing which is entirely new to my students. Because of the complexity of what I am asking them to do, the instructional sequence has already spanned over four weeks, broadly following the ‘backwards fading’ continuum. Typically, practice exercises will be completed every lesson, although they are limited in duration and combined with lots of other activities. I will write about this process in more detail in a later blog.

Backwards fading seems like a sensible approach when teaching almost anything as, if it is done correctly by spending sufficient time on each stage, it seems to hit a sweet spot where cognitive load is managed and student effort is maintained. The ‘backwards fading’ continuum is a sequence of tasks that slowly increases learner application and effort whilst simultaneously reducing the need for worked steps. As students grow in proficiency, they are required to solve more of the problem themselves, a shift that represents the transition from novice to expert.

Next post: Combining The Alternation Strategy and Problem Completion Effect-Examples from teaching writing.